Chicken is known as one of the most challenging meats to grill. Get it right, and you have a juicy, easy-to-eat breast. But if you char it for too long, you end up with a dry, cardboard-like piece of meat. There are several things that can ruin grilled chicken. These are some common mistakes people make while grilling chicken, and some tips on how to get the perfect piece of meat next time. Grilled chicken can be juicy and flavorful, but it’s also one of the hardest meats to cook perfectly on the grill. Overcrowding or forgetting to clean the grill’s surface can leave you with burnt chicken.
Don’t add any sauces too soon while the chicken is cooking, and make sure to let the meat rest off of the heat before cutting into it.

Make Sure The Heat Isn’t Too High. 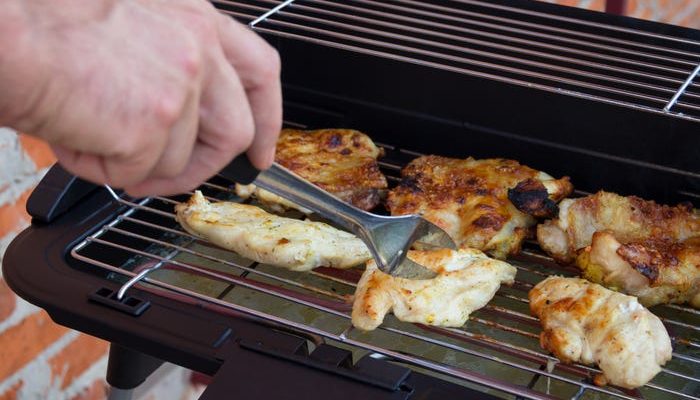 If you’re cranking the heat up too high you might be ruining your dinner. Courtney Rada, foodie and host of the meat-focused show “Carnivorous” on Genius Kitchen, said that you don’t need to keep your grill super hot. “If you’re using a gas grill, medium-high is an ideal temperature — about 350 degrees [Fahrenheit],” she said. If you’re using charcoal to cook wings, consider pushing the coals to one side so the chicken cooks on indirect heat. That way you have direct heat on one side for searing and indirect heat on the other for lower and slower cooking.

Don’t Leave The Grill Open Because The Heat Will Escape. 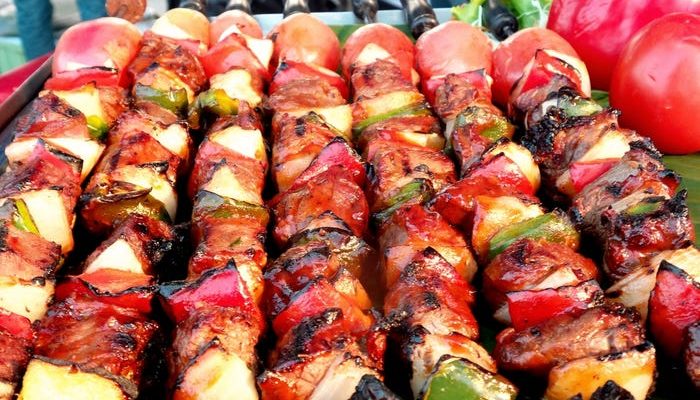 A grill’s temperature drops each time you open the lid. Leaving the grill open leads to fluctuations in temperature. That’s why Claudia Sidoti, head chef for HelloFresh, said to cover the grill while the chicken is cooking to create an oven-like experience and prevent precious heat from escaping.

Meat Thermometers Are The Only Way To Tell If Your Chicken Is Really Done. 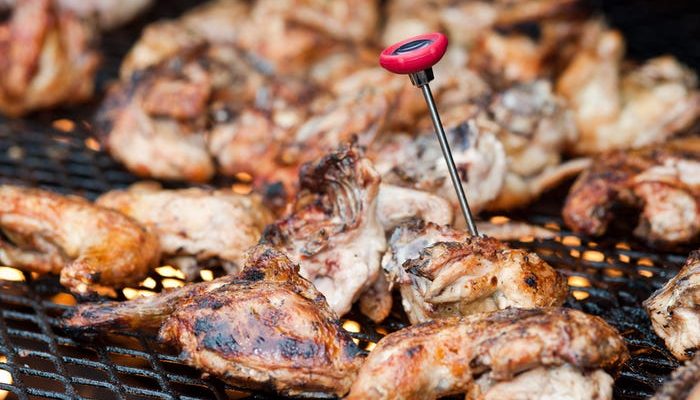 If your meat thermometer is collecting dust in the back of your silverware drawer, you might want to dig it out. Both Rada and Sidoti said not using a thermometer is a big mistake. “A meat thermometer is really the only reliable method for determining when meat is done, and there are even meat thermometers that list the actual poultry and temperature on the dial itself to really help guide you on your grill journey,” said Rada. Sidoti recommended using a meat thermometer to make sure your chicken has reached an internal temperature of 165 degrees Fahrenheit. Insert the thermometer into the thickest part of the meat to get the most accurate reading and make sure it’s not touching the bone.

Make Sure You Don’t Add The Sauces Too Soon. 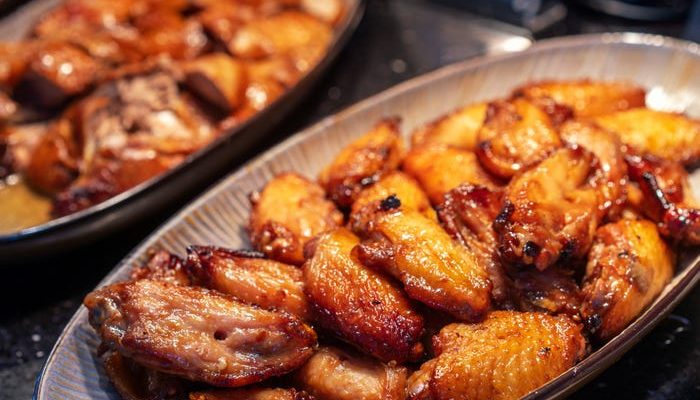 Sugar-based sauces can burn if they are added too early in the grilling process. To avoid burning your chicken, you might want to wait a few minutes before slathering your favorite barbecue sauce onto your chicken. In fact, Rada said, let your chicken sit on the grill before adding more marinade to it, especially if your sauce has a high sugar content as barbecue sauce does. “Sauce can add a great caramelized crust and flavor but adding too much too early can cause sugar to burn quickly, and make it more difficult to judge if your meat is cooked through,” she would say.

Don’t Overcrowd The Grill With Other Foods. 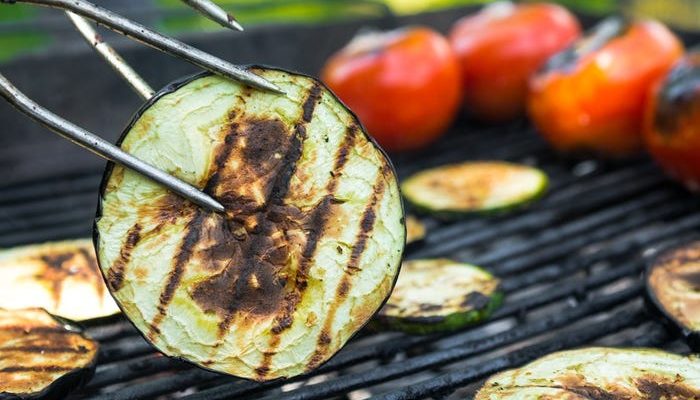 It’s tempting to pack the grill full of your favorite fruit and veggie kabobs while the chicken is cooking — but this can end up creating a big mess. Adding too much food to the grill can cause the flames to grow. “If you crowd the grill with other food, the drippings can build up and create larger flames that may give your meat a burnt taste,” Rada said. 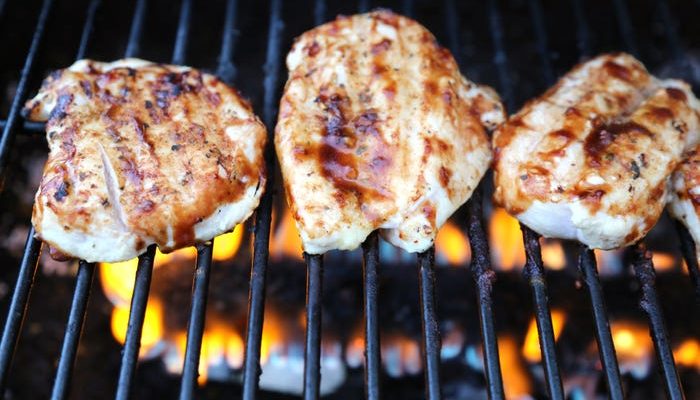 The cooking time and temperature will depend on the cut of meat, according to Rada. Each cut of chicken cooks differently. If she’s grilling a chicken breast, she said she’ll flip it four times, which creates a sear for the first two sides to keep in moisture and also adds that nice charred flavor from the grill. Then she finishes with the last two flips over indirect heat. “A chicken breast cooked correctly will un-stick easily when finished — it shouldn’t fight you when it’s time to take it off the grill,” she said. If you’re grilling something other than a breast, such as a wing or a thigh, you may want to ask your butcher about the optimal cooking time for the particular cut of meat you’re grilling.

Don’t Dig In Too Soon After Grilling. 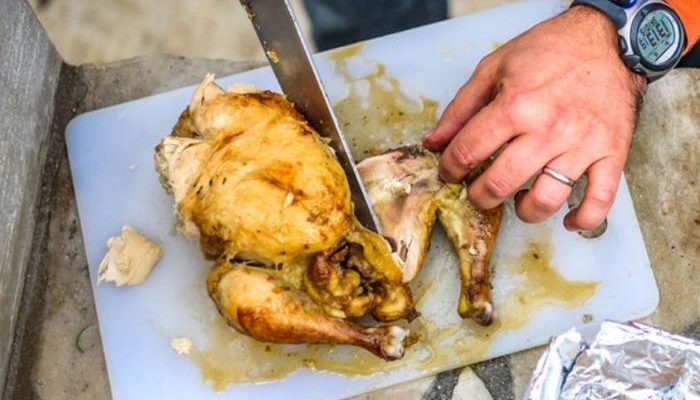 You may be left with dry chicken if you dig in too soon after grilling. To avoid letting the juices run out, your chicken should let it rest off of the heat before you cut into it. Rada said smaller pieces only need about five minutes, but you should wait 15 to 30 minutes for a half or a whole grilled chicken. Letting the chicken rest is key for keeping the juices intact.

Cleaning Your Grill Regularly Can Make A Huge Difference. 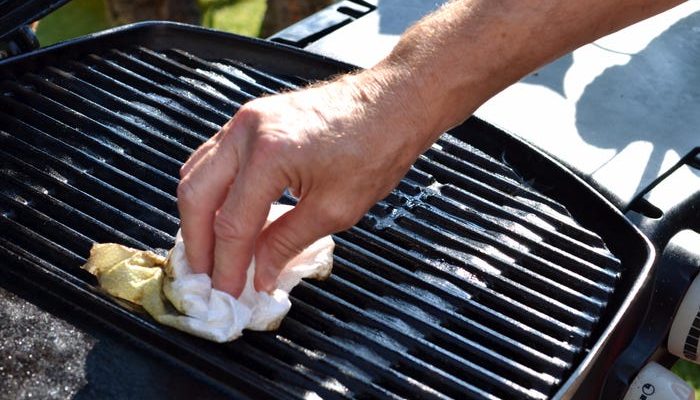 The general rule of thumb, according to Rada, is to clean your grill before you start cooking. Keep your grill clean to avoid extra flames, as stated by Rada “it’s crucial to clean your grill with a good brush to avoid flare-ups.” She said she prefers bristle-free brushes or nylon. If you don’t have a grill brush handy, Rada said, you can scrunch up a piece of aluminum foil, pick it up with kitchen tongs, and scrub the grill with that.